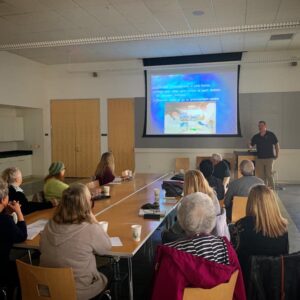 At our January meeting, speaker Tim Fayle warned his audience of fifteen Coastal Cruisers and guests that the slides he was about to show were graphic. They were.

The year was 2011. New Zealand had just experienced a 6.3 earthquake; 181 people died that sad day. Fayle was on the job in Japan, assessing the post-catastrophic damages from the Fukujima tsunami. The following day, he was on a plane headed to Christchurch, New Zealand, epicenter of the earthquake, to assist in identifying bodies.

Fayle, the current Fingerprint Identification Director with the Santa Clara County Sheriff’s Office, has worked the “whole gamut” of the procedural crime scene. Fifteen years in forensics, ten in fingerprints. He stood before our attentive group of crime writers in his DVI (Disaster Victim Identification) Team 2011 shirt and, with a hearty Australian accent, spared no detail in explaining the use of fingerprinting to identify victims in post-disaster Christchurch.

The 2011 quake was actually the aftershock of an earlier 7.1 magnitude that shook New Zealand. By contrast, that one resulted in no deaths. “The first occurred during the night (4:35 a.m.) when people were home,” Fayle explained. “The second was in the middle of a busy lunch time on a lovely summer day, and that was part of the problem.”

Downtown buildings were reduced to rubble. One—the CTV building--collapsed because, after the first earthquake, an adjacent building had attached itself as a reinforcement remedy which woundd up undermining the CTV, resulting in 113 deaths.

“The only people who made it out alive from the CTV building were those in the lobby who could run out,”  said Fayle.

In another collapsed building, 18 people died. The smokers who had gone out to the roof to have a cigarette survived. A helicopter transported them to safety.

The pathologist on the scene told Fayle that “the injuries she saw here she’s never seen the like of before in her 20 years of this kind of work.”

The most harrowing story for Fayle was of a man who’d been caught during the quake between the floors of a large building, legs on the lower floor and torso on the upper. They considered amputation to save his life. But, after painstaking deliberation, the risk assessment team determined his body was a “load bearing mechanism” that kept the building from collapsing. They concluded the risk to others including search and rescue below was too great to remove him. They gave him morphine for the pain and a cell phone to say his goodbyes. He lasted 7 more hours before dying.

While the disaster crew camped in tents, the Burnham military base provided the space needed to set up a “makeshift morgue.”

“Critical was ventilation,” said Fayle, “because of the stench of dead bodies.” But stench doesn’t bother Fayle.  “I’ve never had a problem with the smell of a dead body or the sight of dead people.” Fayle has an ability to regard dead bodies “as objects.”

“Call me a psychopath,” he said. “I wouldn’t exactly call it lucky.”

Eight refrigerated shipping containers to store the bodies sat inside the makeshift morgue. During the course of victim recovery and identification, the number rose to ten containers.  A huge tarpaulin, which had to be changed three times, was laid over the large floor space.

Fayle’s slides showed long tables representing various stations for identifying the corpses, including a team examining the teeth of a burnt corpse and another examining viscera. In the entrance to the morgue’s main tent, team members dipped their shoes into a tub of bleach mixture before entering to kill germs coming in. Safefy equipment was stacked against the entry; meanwhile, supply line factories went into overdrive to accommodate the CVI team.

Positive identification is essential for the body to be returned to surviving relatives, and this requires hard evidence—fingerprints, DNA and dental—and/or circumstantial evidence—personal property, location of where the person was found, and witnesses.

Fayle worked on gathering circumstantial evidence, an initial step, which meant removing all clothing and every personal item from the victim’s body. Imagine cutting jeans from a burnt corpse. To manage the task, his team drew onto white paper several sketches of the body parts from which each item was taken—hands, ears, and so on. As an efficient way to help subsequent ID steps, each personal item was placed on the appropriate drawing and a photograph was taken before the body and file were sent on.

Fingerprinting, which is Fayle’s field of expertise, deals with “mostly fresh bodies soon after the event,” he said. In the case of Christchurch, many victims were so badly burned the fingerprinting team took a lot of dermis and mikrosil casting, a material used in forensics.

“The print goes in the file and that file stays with the body the entire time, all the way to quality control to check the completeness of pink form documentation and to ensure the remains are ready to go to the ante-mortem centre."

“By far the easiest one to fingerprint was the one completely flattened down,” Fayle said, “like a clown’s hand,” illustrative of the profoundness of the injuries.

“This was the first disaster where fingerprints led the ID break up,” Fayle said.

The post disaster work by this DVI (Disaster Victim Identification) team, Fayle admits, was well organized and well received. With one exception—a New Zealand authority who, after visiting the morgue and seeing first-hand the work being done, completely retracted his criticism.

Fayle projected a slide picturing a long black shiny vehicle and men loading a corpse into the back. An apt ending to what one attendee called a “sophisticated and detailed” presentation on corpse identification following a disaster.

“A hearse driving off with a body was always a good sign,” Fayle said. “It meant the body is being repatriated.”